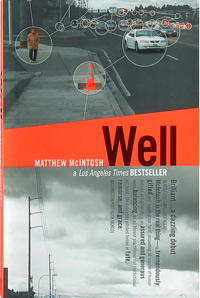 [ Adda put down her nail file and lay back on the bed.

Len, saving one last hit in the bottom of the bowl, exhaled, and put the pipe down. Quietly, he walked to the bedroom door, stood outside and listened for her. Then, hearing nothing, he left, shutting the apartment door behind him quietly, then down the hall to the fire escape, down the stairs and through the alley behind the strip club [inside of which the girls were downstairs getting dressed, the bartender was leaning across the bar joking with the DJ, the manager vacuumed the red walk-up carpet, the waitress was beating the dust out of a couch cushion with her fist, the bouncer sat on his stool re-arranging his tie, waiting to hear the word and turn the sign on to say:   OPEN], and across the parking lot to the market. He nodded to the old Asian man behind the counter and picked up another six-pack from the cooler. The game had just started and the Asian man was watching it on a small TV behind the counter.

We’re not doing so well, Len said, and the Asian man said,

That was the team that could have won a championship. We lose tonight we won’t even make the playoffs.

But if we do make the playoffs, the man said, I think we will do something special.

Len agreed. In their hearts, they were optimistic people.

They said goodbye and Len walked back towards the apartment with his beer.

Adda was the girl that he wanted: beautiful, smart—smarter than him, though he wouldn’t admit it. The best lay he’d ever had. Adda did things to him he could never tell anyone. Someday he hoped to start his own marble and tile business and marry her and build her a nice house. Retire by forty. A couple rugrats. He wanted to treat her good. He never had much money but he always paid for everything. He paid for the weed, he bought her wine coolers, he took her out and picked up the check. It made him feel good.

But now she’d told him she was leaving in the morning to visit her fiancé in California who wanted her back. She said she owed it to the guy to give him a week.

She’d been with R since she was fifteen and then a few months ago he’d left Federal Way, asking her to come, but she told him she couldn’t; she was going to dental hygienist school, she said she wanted to be certified. But that wasn’t the real reason—she hated looking into people’s mouths and she quit soon after he left, got a job answering phones at a lawyer’s office in Seattle. The real reason was it was occurring to her then that she didn’t know if she really loved R.

When she’d told Len she was leaving and why, he’d said, You don’t owe him nothing.

You don’t know what you’re talking about.

I don’t know what I’m talking about?

You’ve never been with someone that long. You don’t know what it’s like.

At first, when they’d gotten together, Len hadn’t cared that she had a fiancé or that the guy had money or that he was taller than Len and better-looking from the picture he’d seen in Adda’s wallet. What did it matter to him? What did she matter to him back then? He was just fucking some dude’s girlfriend. It turned him on. He used to imagine the guy opening the bedroom door while Adda was going down on him, he imagined himself saying something smart like:   She insists on doing this after every meal. It didn’t matter then. But sometime over the past four months, Adda had turned into his girl and he’d started locking the door, not wanting to give her back.

When she told him she was leaving, he’d said, No you’re not.

You can’t make me not go.

You don’t think I can?

Well, why the fuck do you wanna go down there, anyway?

Why was she going down to California when things up here were fine with Len? She wondered if she really felt she owed R something or if it was just that she wanted to see what his life was like down there. See what kind of life she would have had if she hadn’t have stayed. R had said, Come down and see the house I bought for you.

Then you’re coming back?

Where are you gonna stay?

Where do you think?

You can’t stay with him!

She’d said, I don’t want to talk about this anymore.

Adda you can’t fucking stay with him!

She called Len her Come Machine. He took pride in seeing how many times he could make her come in one go. They had a joke that if he reached six Adda would wash his truck. They fucked everywhere: on the roof and in bathrooms and changing rooms and one time on the stage after her dance class when everyone had gone home and on her boss’s desk one night floating high above the city in the dark—it was so beautiful and down below in the dark the red and white lights, the cars slid down the freeway slid down the valley between the dark mountains and the dark warm sea and what was underneath and Len didn’t stop. She loved fucking him. They did things she’d never tell anyone.

He’d said, Well, where are you gonna sleep?

You’re gonna sleep in his bed with him?

Stop it. I don’t want to talk about it anymore.

And they talked to each other during sex and called each other names and she liked it. And he let her be the man sometimes. A woman could be a man as well as a man could. Because a woman knows the difference. When she was with R she’d never thought to do or be anything other than what she was, and who she was then was not anyone special: a girlfriend, a dental-hygienist-in-training.

She didn’t care if you brushed. She didn’t give a shit about plaque. She never flossed, herself. Her teeth were stained.

Had she loved R then? Did she love Len now? Was it enough to care for a person’s well-being? Was it enough to be attached to someone? Enough to desire? Did it make any difference that one could make her come and the other couldn’t or that one had a dream that was coming to fruition and the other a dream that he would never fulfill because—well, because she couldn’t see it happening?

Was all this—had it always been—was all she capable of—just a cheap imitation of love?

(What are you waiting for, Adda?

What’s wrong with you, Adda?)

Was anyone actually in love?

(Are any of you out there in love?)

She could see Len down on the street, walking back to the apartment with a bag in his arms. She could see on the window that it was beginning to rain. He looked so small.

Adda let the curtain fall and sat back down on the bed. She went back to working on her fingernails, looking up every so often at the door.

And what if she let that guy touch her? Adda wouldn’t say that she wouldn’t.

You don’t understand, she’d said. You don’t know what you’re talking about! Then she’d gone into the bedroom and locked the door and he’d stood outside, saying:

Len had never hoped for anything and with her there was hope he could hope for something Christ what if she doesn’t come back?

He couldn’t even tell you how he needed her.

Now he stopped in front of the apartment building, looked up.

Len sat down on the curb and lit a smoke.

Adda, after counting in her head much more time than it should have taken Len to dial the code to the front door, open it, walk through the lobby, then up the five steps, around the corner, open the door to the stairwell and walk through, then up the two flights of stairs, through the door, then make a right turn, then a left, then down the hall and open the apartment door, got up again from the bed and, lifting the curtain with her fingers, looked down.